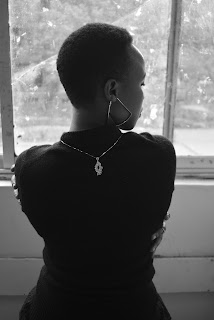 From the people who brought us this:

This too was disappointing: 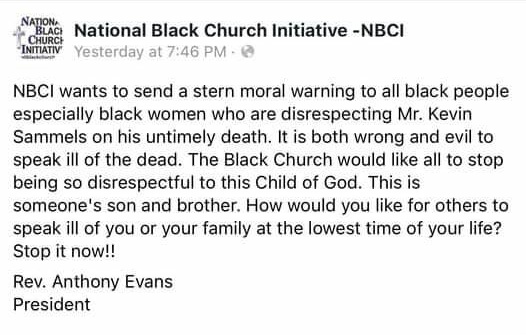 Not because I support rejoicing over the death of a human being. But because:

1. There seem to have been more calls to "stop rejoicing & celebrating" than there actually were so-called "celebrating".

I suspect that it isn't the alleged "celebration" that bothers people but the lack of public mourning from women.

Black women are familiar with this sentiment.  It must be akin to the anger at the lack of community support when a Black man is found to have been violent, disrespectful, and disparaging against Black women & Black girls.

2. If Black women were outspoken in our calls for the dehumanization & degradation from this member of the community who is no longer with us...why were there no "stern moral warnings" ever before in the past?

Why weren't people cautioned to watch their words & tone when it came to how they spoke about the women & girls in the community?

Are women & girls not deserving of at least that?

3.  I hope and I pray that this organization & other faith-based organizations have & will continue to put out many "stern moral warnings" to end what is killing members of our community daily.

I am hoping that there comes a day when Black church folk make announcements around victims and Survivors of violence & abuse in our communities.

We've not forgotten that R Kelly, who abused, raped, & violated countless young girls nearly in plain sight, continued to have a wonderful career in gospel even as rumors and a trial continued.

I am hoping that there comes a day when all churches and houses of faith come back to ourselves and realize that we are to be symbolic of healing, wellness, and courage by confronting violence and abuse without flinching.

I am hoping that there comes a day when victims of violence and abuse are regularly told that they are beautiful, valuable, special, and should harbor no guilt, shame, or low opinion of themselves.  That the church/house of faith is with them through their journey to healing.

I am hoping that there comes a day when the church stands up mightily and fiercely to declare that if the twin towers of abuse & violence are Goliath, then the church is the David that will stand with victims. That the arms of the church are open to victims of violence & abuse always, no matter who is inflicting that sickness upon others.

May all of these things come to pass one day soon and stop causing more pain, disease, and sickness in our communities around the world.

Abuse, violence, bullying, & inflicting more pain upon members of a hurt community should no longer be tolerated, even from members within the community.

Other people are healing, thriving, and loving; meanwhile they are struggling with demons that set up camp inside of them a long time ago.

Calling women names & body-shaming might feel good in the moment. But, the most terrifying thing in life is to live with yourself when YOU don't even like yourself.

I want healing & not the quick hit of spreading more pain through bullying, blaming, and violence.

I want healing so good that they come to believe they're worth at least that.

We don't have to support the lie that bullying others is some sort of 'goodwill awareness campaign for the community.'

We don't have to support the lie that every word spoken about a people/persons, no matter how crass or cruel, is for someone's benefit.

We don’t have to support the lie that people who body shame others are just ‘folks who happen to be concerned about that person’s health.”

We can tell the truth and let the true devil; misogyny, violence, abuse, hate, poverty, and greed, get all the shame.

May God keep us all and raise us up where we belong on this and every issue within the community.

Black women make up the majority of the members of the Black church. At some point, you have to speak out for us.

"Injustice anywhere is a threat to justice everywhere."