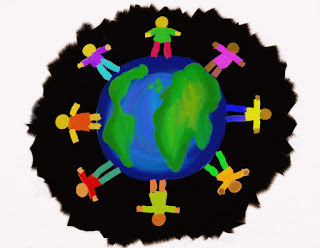 Last May was one of the happiest days of my entire life.
My son graduated from high school. I sat there among the other proud family members as the band played a medley of inspirational tunes. I was sitting with just a portion of the village that helped me raise him.
I always thought that when this day came I would be sobbing. People around me would wonder if I was confused. “Does she know that this is a graduation and not a funeral?”
Strange. Both eyes dry. Heart overflowing though.
I was sitting there just feeling basking in gratitude for all of the people who had ever given me advice, support, love, encou……
{Thunderbolt}

The student band began to play a tune by a known pedophile. TRIGGER.
Fine. I’ve learned how to adjust. But I was angry.
Not for me, for the young people in the building. I know the statistics by heart. I know what research says. I know the word on the porches, poles, in the pews, on the pages, and in the streets.
So, I know that there were likely a large number of young people assembled in that hall who had experienced sexual violence.
Unfortunately we/they are the ones that have to live in a world where right is wrong and wrong is right.
The victim is wrong for being a victim. The victim is wrong for telling someone that they are a victim. The victim is wrong if someone anybody other than God and the devil found out that they were a victim.
That song is over now.
The crowd applauds with great enthusiasm. So wrong! Perpetrators of sexual violence always have a voice and always keep their voices.
Child sexual abuse is likely the most prevalent health problem children face with the most serious array of consequences.1
1 in 5 girls and 1 in 20 boys is a victim of child sexual abuse.2
If sexual violence were a disease or condition folks would be rallying for a cure.  But, we are not waiting for a cure.
WE ARE THE CURE
Everyone can agree with that. So what is the problem?
The definition of child sexual abuse does not change.
I’ll tell you. People.
Everyone can agree until it is someone THEY like who is accused/admits to child sexual abuse.
Until it is your favorite singer.
Your favorite writer.
Your favorite comedian.
Your t.v. star.
Your favorite person that you could just memorialize and put in a time capsule to represent all that is faith, talent, empowerment, inspiration, or something.t.v. star.
Your favorite person that you could just memorialize and put in a time capsule to represent all that is faith, talent, empowerment, inspiration, or something.
Orrrr….. your family member. Your female family member. Your church member. Your beautiful teacher. Your pastor. Your local hero.
So?
This has always been strange to me.  Sure these “charming or “charm me” people have a lot of fans under their spell.  But that changes nothing for victims.  In fact, it makes life worse.
Folks, whatever a person’s talents, charms, positions, or titles it doesn’t heal what they have broken.
The fact that a person has a legacy doesn’t heal scars.
The fact that someone is entertaining to some doesn’t heal scars.
The fact that they bless YOUR socks off on Sunday doesn’t heal the scars of the person who has worn the same ones for a week because they are just that miserable & depressed.
Folks, victims/Survivors are not your handbag or dress that makes you look thin, nice, or morally superior.
We are not your new look that makes you look more “hip”, more “humane,” or more “in touch with the people.”
It would be great if people would avoid poaching from the traumatic experiences of victims/Survivors of child sexual abuse.  Long after people have moved on, there aren’t many around to assist in the clean-up efforts after the destruction.
What child sexual abuse is not
Child sexual abuse isn’t aligned with any one political party.  It isn’t affiliated with any one religion.
It isn’t a gender. It isn’t heterosexual. It isn’t LGBT.
It isn’t feminist/conservative/liberal/moderate/shrug who the heck cares?
It isn’t anything that you can put inside of a box.
One thing it is: It is the collective responsibility of ALL of us to protect children from those who, for whatever the reason, seek to tamper with, violate, and/or rape children.   But, in the unfortunate event that someone does harm them, we as a united society must see to it that they accept the consequences for their actions.
Further, we as a united society should make sure that every community has access to healing to serve the members that we have failed.
The children have NO power.  They can’t do it.  We must.
Just tell us this.
What exact time, day, month, and year do you plan to commit to ending child sexual abuse and holding all parties who harm children in this way, fully accountable? I mean once and for all without regard for all this other stuff.
I am asking, for the sake of the children.
This year, there will be about 400,000* babies born in the U.S. that will become victims of child sexual abuse unless we do something to stop it.3
1Townsend, C., & Rheingold, A.A., (2013). Estimating a child sexual abuse prevalence rate for practitioners: studies. Charleston, S.C., Darkness to Light. Retrieved from www.D2L.org.