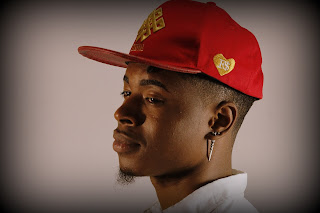 So last night I was twitter watching one of my favorite shows. Yep, it is a crime show.

You can read about the story here:
What I want to talk about is the reaction on social media.
**Emotions High As Former Bloomfield Football Player Sentenced In Fatal Stabbing
Myths about Teen Boys and Sexual Abuse
Well, here were some of the comments from twitter. Same myths different day. Folks broke out the pictures, rhymes, old sayings and everything.
Here is the gist:
Myth: “Terance was gay and didn’t want to deal with it.”
When a young male is assaulted by an assailant who happens to be male that does not mean that the male victim is gay.
Sexual orientation is complicated, personal and beautiful.
Male on male sexual violence is nothing like that. At all.
Male on male sexual violence is less complex, isolating, and violent.
It is about the enforcement of power and control.
Myth: “Terance could have stopped the abuse if he had wanted to.”
Terance was groomed.  In the television show we saw the perpetrator’s own family member unwittingly give us his relative’s tricks of the trade.
He offered young boys a place to come and hang out.  They could come play video games and drink alcohol.  Once the young people were drunk and vulnerable, the perpetrator would attack them.
Myth: “This wasn’t a situation of abuse at all.”
At some point we have to get people to understand that teenagers are not nearly as savvy as adults.
They are not even as savvy as someone a few years older than them. They are still developing.
It is like a cooking. Look, I like some things a little less than done.  My cakes, my bacon. A few other things.
But goodness gracious me.  My son took two years of cooking classes.  Gotta, give it to him. He is awesome. G. Garvin, just letting you know, he is coming for you.
Anyway, when I cook, he is always pestering me about cooking my food longer because of this bacteria or that bacteria.
“Mom, I’m just saying just because it looks done and you want it to be done doesn’t mean it is done.”
People are like that.
Kids may look like adults.  And, when adults commit crimes against 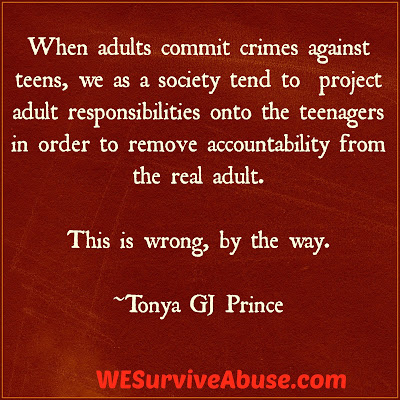 teens, we as a society tend to project adult responsibilities onto the teenagers to remove accountability from the real adult. This is wrong by the way.

Still, keeping it real, the teenager is a kid.

Miss me with the sliding scale thing.

“Well the kids from the mean streets of XYZ are older because….”

“Well, in Germany you can drink by this age….”

My hands are clasped and I am patiently waiting for you to stop talking nonsense.

Myth: “Terance was a football player/male so he should have been.
Just because a child is physically strong doesn’t mean that they can fight off an abuser.  Acquaintance child sexual abuse/rape doesn’t use physical strength anyway.  What happens is that the perpetrator gains the trust of the young person over a period of time.
They make the young person feel that their “relationship” is “special” and “different” and “unique”.
The perpetrator creates a false fantasy world in which only the two of them exist. If you are an adult who has ever been in a consensual relationship you know this feeling.
All the perpetrator does is recreate this step, but against an unsuspecting naïve teenager who isn’t even looking for it.
The Real Adults in the Room
Look, we have to start with the real adults in the room. We must protect them. We complain about them an awful lot, but think about this. Who are the adults, us or them?
Do our actions and laws demonstrate that we care about them?
Do our actions and laws protect them?
Are we making sure that lawmakers are addressing these issues to include male victims?
Two sites I like that address male sexual violence:
MaleSurvivor.org
1in6.org
TogetherWeHeal.org

The Problem with saying: “That Never Happens”