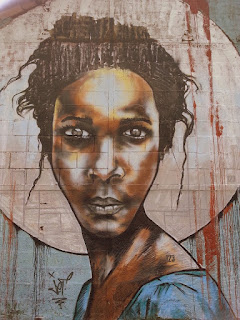 One of my all-time favorite songs is by the great Bonnie Raitt: “I Can’t Make You Love Me”
It fits today.
During the Daniel Holtzclaw trial, there were few, if any mainstream feminist organizations, women’s organizations, or sexual assault organizations lending their support.
Since the entire media was intentionally silent, the heavy lifting was done by women of color via social media. Now there were some individual white women supporters but few, if any, other mainstream groups or organizations.
This has been a longstanding problem.  During my career as a nonprofit professional, I have seen it up close from the inside. That is how I know exactly how this works.
Oh folks try for a little while.  On numerous occasions my fellow white co-workers would go along with people of color and white idealists for a bit.  Then when they had had enough, they would revolt.
Once a colleague began a meeting with these words.  “I have spoken to the other directors.  The Women of Color ‘stuff’ is getting to be too much.” I just happened to be the only Woman of Color present.
See, sometimes people go along for the optics.  The intent is to look like a socially evolved person without actually doing the work that it takes to be one.
This way of thinking is dangerous.  This is harming us. This is nurturing rape culture.
After all of my personal, professional, and volunteer experience, I have come to believe that it is a major contributor to our inability to make a much impact on these issues.
Give the People What They Need
We have too many people working on the inside who are not invested in serving the needs of all of the people.
‘The people’ includes people of color, people of faith, men, boys, substance users/abusers, atheists, prisoners, poor people, wealthy people, democrats, republicans, independents, non-affiliated.
‘The people’ definitely includes LGBT.
‘The people’ may have disabilities, might reside in rural areas, urban areas, or on sacred ground.

‘The people’ may speak a different language other than English. 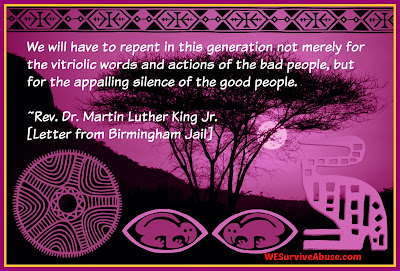 BUT if you are devoted to ending violence, these differences should be learning experiences for you.  They should never hinder you from service.
We can talk about men fueling rape culture.  But we must also discuss how some advocates intentional silence is doing a pretty good job of keeping the culture of violence healthy and strong.
3 Ways Advocate Organizations Nourish Violent Culture
1.     Silence is power. Most advocates know the power of their silence and the power of their voice. Individual advocates and advocate organizations, both know that when they don’t say anything that they are leaving victims in a state of isolation.
2.   No knowledge for you. Advocates have a great deal of information and access to a plethora of experts and resources.  If they are not sharing statistics, resources, and other good data, they just don’t want to.
3.    Silence as a mute button. And, you do know that sometimes people just don’t talk about things because they don’t want YOU to talk about it. Thus, the public remains less informed about sexual and domestic violence when advocates do not support everyone sharing their story.
It is just like everything else in life. Until we change the inside what we do on the outside isn’t going to be enough.
What Can They Do? 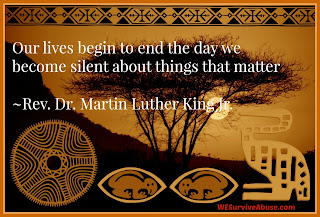 A great deal must be done, but we have to at least get started. I encourage organizations, groups, and individuals to decide that you want to change.

They must be consistent.

They must serve the needs of all ‘the people’.
No one should ever feel silenced.
Every victim/Survivor should feel heard and supported.
Our unity should be authentic.

(Note: Domestic violence organizations, this includes you. We haven’t forgotten how you left too many victims hanging.)